As Nobel Peace Laureate, Prof. Muhammad Yunus, emphasized, our current civilization has set the world on a timer. Our daily actions and activities are leading us to the tipping point of the Planetary Limits, resulting in an environmental crisis that endangers the existence of our civilization. Yunus Environment Hub curated a plenary session discussing measures to shift towards a new civilization within the planetary limits and presented its 2021 impact report to showcase examples of concrete action.

The session was moderated by our Co-founder & Managing Director, Christina Jäger and was divided into three main segments, starting with the criticality of the current global situation and a discussion on how a circular economy may be a way to maintain us in a safe zone. The second and third segments presented case studies demonstrating the practical side of the implementation of circular economy models as a way forward to address resource efficiency and preserving natural resources and biodiversity, respectively.

Professor Marian Chertow, Director of the Center for Industrial Ecology at Yale University

Through drastic current facts, Professor Chertow delivered a clear message: “we are in the middle of an environmental crisis, and things will keep going wrong if we do not address this issue urgently.” Among the current concerning scenarios, Chertow mentioned the acute drought in Colombia, the lack of rain in central Germany, more frequent fires on the west coast of the U.S., and the extremely high temperatures around the globe destabilizing the planet and even more endangering our existence. For instance, 9 of the 10 hottest Junes have occurred since 2010.

According to Chertow, international agencies have discussed the decoupling economy – meaning economic growth without more pressure on the environment – for the last 5 to 10 years. This model suggests the GDP increases and the environmental pressure decrease over time (absolute decoupling). However, research indicates that this is very complex to achieve, and we might get to a relative decoupling, where the GDP slightly increases and, therefore, there is less environmental pressure. Nevertheless, according to Chertow, we cannot rely on relative decoupling, and further, we urgently need new metrics of well-being that actually consider human progress and a healthy environment.

Chertow also touched on the importance of the Planetary Limits as “the lines that should not be crossed” because the nine limits [1]  represent the thresholds within which humanity can survive, develop, and thrive for generations to come. In other words, they create a safe operating limit for the survival of our civilization. However, Chertow pointed out that in 2009 we were already trespassing the limit of climate change and biochemical flows. Currently, we are also exceeding the limit of novel entities, the chemical pollutants that harm genetics in living organisms, including humans.

According to Chertow, in order to avoid an environmental crisis, we, as a species, need to make a shift in our way of production, moving towards an industrial ecosystem where “the consumption of energy and materials is optimized, waste generation is minimized, and effluents from one process serve as the raw material for another.” In this regard, the circular economy framework has brought significant awareness to essential topics such as eliminating waste and pollution, circulation of materials, and regeneration of nature.

Chertow reminded us that we need to keep high expectations for a circular economy but not so high that they lose effectiveness. In the words of Terry Yosie, “The path towards a circular economy lies not in high-altitude resolutions, pledges, and manifestos but through decidedly less glamorous earthbound work.”

Finance Mechanism Solutions to Achieve circularity in the Plastic Sector

Plastic credit schemes have the potential to be an effective financing tool for informal waste workers. However, due to the lack of an international binding agreement there is no common definition or governance framework in place, resulting in intransparency and risks of greenwashing. The ValuCred program aims to standardize the processes along the value chain for the valorization of plastic credits and to harmonize the activities of the plastic credit market actors. To this end, the program tests a tool with pilot partners in India, Vietnam, Ghana, Angola, and Brazil via a digital interface to learn which processes are happening and how local waste management services are operating.

For the 12th annual of the Social Business Day 2022, a pilot partner in Ghana and a program manager from Yunus Environment Hub India shared their insights from the ongoing process.

Coliba is a tech-driven company that allows users to locate trash collection points within Ghana and request pick-up services. Through their network, they have connected waste collectors in their network all over Accra with users who can order their waste to be picked up. Currently, Coliba employs over 200 people, most of whom are women.

As a pilot partner of ValuCred, they are testing the ValuCred technology that enables them to see more traceability from the collection site to the recycling facility. Prince emphasized how this tool empowers the waste pickers by overcoming digital illiteracy. According to Prince, the smartphone application enables them to collect valuable information that unveils new metrics that provide insights on how the program could be improved for them. However, Prince acknowledged that it was not easy for waste collectors to use smartphones and tablets for data tracking. He notes that the challenges were more difficult at the level of waste collectors and aggregators. “These are people who never had a phone,” mentioned Prince.

Moreover, in addition to digital illiteracy, some did not know how to read and write. As a result, there were issues of double or triple data entries in the application. In order to overcome this barrier, Coliba invested over a month of training sessions with the waste collectors, and improvements were seen over time. Now, the training is continuous.

Coliba’s CEO shared that a current constraint on the ground is that some waste collectors are disincentivized from becoming formal workers because they worry about taxation, despite their recognition as essential workers by the local Government. Currently, Coliba is discussing with the Ministry of the Environment other alternatives to incentivize the waste collectors’ formalization through tax waivers.

According to Iyyapan, the main challenge faced was during the onboarding of the test participants. The waste collectors hesitated, fearing that the uploaded data would expose them to the Government. However, Iyyappan mentioned that the continuous explanation of the project’s objective helped significantly to build trust resulting in their engagement with the pilot testing. They are fully committed to receiving a 4-week-training on using the digital application for waste tracking.

After the training period, the waste collectors were ready to use the application and start tracking the collected plastic. The preliminary results were surprising and were embraced by the waste collectors and scrap shop owners: “After the fourth week, they performed very well by using the digital app, and mostly the scrap shop owners expressed that after finishing this testing, they wanted to keep using the app.“

The Regeneration of Natural resources in a Circular Economy

Several factors currently threaten Amazon’s biodiversity, such as climate change and pollution; however, according to Maria Antonia, there is no doubt that human beings are the biggest threat. Our current consumption and production patterns have a direct impact on deforestation and, therefore, on biodiversity. For instance, activities such as extensive livestock farming and the accelerated expansion of the agricultural frontier imply the loss of natural habitats and agrochemical pollution, destabilizing the balance within the ecosystem. In addition, Santos commented that just the 50-year-old Colombian conflict alone had an enormous impact on the Amazon’s biodiversity: “the conflict contributed largely to deforestation and degradation of 4.5 million hectares, that’s approximately the size of Denmark“.

In this context, Fundación Compaz developed Paz Verde (engl. Green Peace) to promote productive initiatives in harmony with the environment. According to Santos, one of the main challenges in this setting is the lack of opportunities promoted by the central Government for the communities, who rely on the forest and have been historically alienated. In order to survive, these communities have to work with extensive farming and, thus, contribute to biodiversity loss. In this regard, Santos argued that it is necessary to promote sustainable economic programs that generate rentability and, simultaneously, allow communities to earn a living without compromising biodiversity. For instance, developing agrotourism in this region will meet both goals. Another challenge pointed out by Santos was the cultural and educational barriers. According to Maria Antonia, behavioural change is difficult if there is disconnection when people are not aware of the importance of the forest.

Maria Antonia shared with the audience how Paz Verde promotes sustainable social business practices to address deforestation and biodiversity loss. The program’s main components are strengthening their business, environmental knowledge to build awareness, and leadership, enabling them to work as a community and advocate for the forest. Finally, Santos highlighted the importance of strengthening the sense of belonging among the community: “we usually do not take as much care of the things that we do not believe belong to us.”

Manuela provided an overview of the social businesses developed in partnership with Fundación Compaz, highlighting that this new framework has reshaped their relationship with their ecosystems, becoming ambassadors of their natural habitat. For instance, Asochon is a women-led social business that produces flour and canned in syrup “Chontaduro,” a native fruit species from the Amazon region. In the production process, from farming to harvest, they adopt eco-friendly practices such as using organic fertilizers and handmade traps to prevent infestation. They only use native seeds to preserve the ecosystem and develop their crops within an agroforestry system. Asoparaiso, for instance, is another youth-led social business that produces pulp from acai fruit, native fruit from the Amazon region. This social business harvests acai with a non-invasive, non-extractive process. They look to preserve wetlands, reforest their lands, and avoid monocrops by implementing agroforestry systems.

The Plenary was summarized by Sohel Ahmed, highlighting the main insights provided by the speakers. He concluded the session by reflecting on how the three main segments revolved around the latest figures on the current environmental crisis and how we can leverage social businesses to reach a circular economy without compromising the biosphere’s integrity. 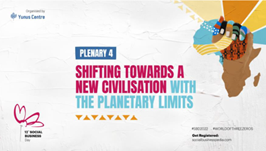 During the “Glimpses of Social Business” session, our Impact Officer, Katerin Carrillo, shared with the audience the results and learnings from our programs in 2021. Among the highlights, Katerin mentioned that we have reached more than 16,000 people, trained more than 500 social business entrepreneurs, and incubated 79 social businesses during 2021. She emphasised that this was only possible through our dedicated team of professionals and strong network of partners and friends committed to bringing change. Find more details of our 2021 performance in our latest Impact Report. 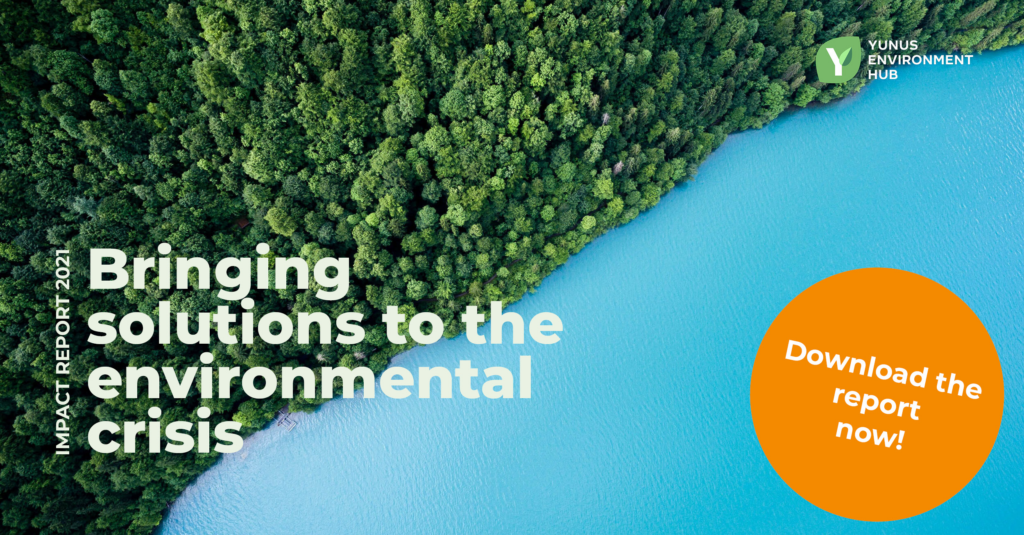